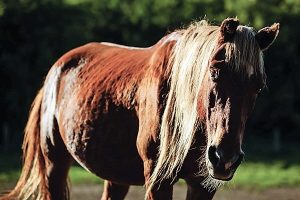 When you think of a sanctuary for wild Mustang stallions, you probably don’t picture it nestled in the heart of midwestern farmland. But that’s exactly where 20 old Mustangs from the biggest horse rescue mission in U.S. history found a refuge to live out the remainder of their days in peace as part of the Hallelujah stallion herd.

Many of the horses who served in World Wars I and II were rounded up from what is now known as the Sheldon National Wildlife Refuge on the northern border of Nevada. It became a breeding ground for these “war horses,” most of whom were shipped to Europe, where they were used to pull artillery or carry soldiers into war.

The Sheldon Mustangs who were left after the wars ended remained on the refuge. They were managed by the U.S. Fish and Wildlife Service (FWS), not the Bureau of Land Management, so they didn’t fall under the protection of the Wild Free-Roaming Horse and Burro Act of 1971, which prevents sale for slaughter...