US Senator Calls for Investigation into Wild Horses

Dianne Feinstein wants to determine how many adopters of wild horses have violated regulations and sold them for slaughter.

Sen. Dianne Feinstein is calling on federal land managers to conduct an investigation to determine how many of the wild horses captured on public lands in the U.S. West end up at slaughterhouses.

The California Democrat also wants the federal Bureau of Land Management to reevaluate the $1,000 cash payments it offers those who adopt the mustangs.

Horse advocates say the money provides an unintended incentive to obtain the mustangs then illegally sell them for slaughter...

TOOELE, Utah (AP) — The sound of the helicopter propeller thundered across the horizon as it dipped down toward mustangs dotting the golden brown plain. The horses burst into a gallop at the machine’s approach, their high-pitched whinnies rising into the dry air.

That helicopter roundup in the mountains of western Utah removed hundreds of free-roaming wild horses, shortly before the Biden administration announced it would sharply increase the number of mustangs removed across the region. It’s an emergency step land managers say is essential to preserving the ecosystem and the horses as a megadrought worsened by climate change grips the region.

“What were seeing here in the West gives some insight into a new norm,” Terry Messmer, a professor at Utah State University who studies wild horse management.

The removals are adding fuel to longstanding conflicts with activists for the animals whose beauty and power make them an enduring emblem of the American West. They say the U.S. government is using the drought as an excuse to take out horses in favor of cattle grazing... 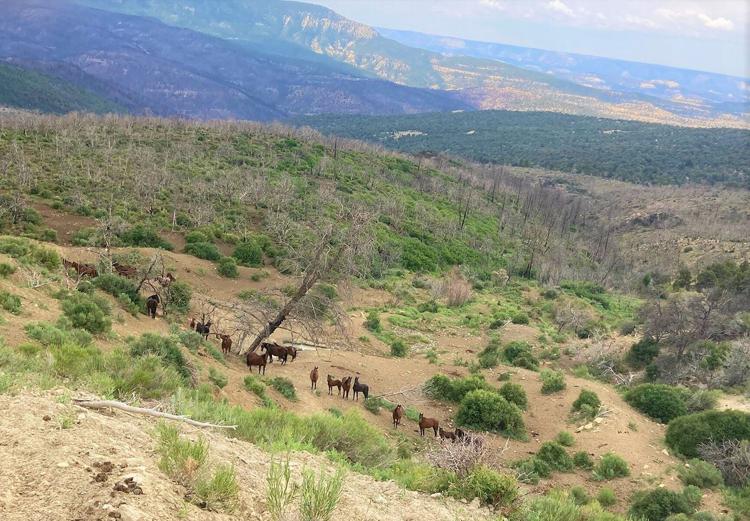 The West Douglas Herd Area, which is about 20 miles south of Rangely in Rio Blanco County, has around 450 wild horses.

To protect the health of wild horses and rangelands, the Bureau of Land Management will start an emergency wild horse gather Monday on the West Douglas Herd Area about 20 miles south of Rangely in Rio Blanco County.

The BLM plans to remove the entire estimated population of 450 wild horses from the herd area, on state and private land.

The extreme drought conditions have limited forage production and water resources for wild horses, and the nearby Oil Springs Fire has also created problems for the herd since it’s burned critical summer habitat and limited access to water sources.

86,000 wild mustangs that roam the West are at the center of raging controversy

Activists condemned the government’s recent capture of nearly 350 mustangs, but for those tasked with managing a booming wild horse population in a drought-stricken West, it’s complicated.

Just off the historic Pony Express Road in western Utah lies a picture-perfect vista of the American West: miles of sagebrush grasslands set against the foothills of the Onaqui Mountains. And, until early July, nearly 500 mustangs grazed and galloped through it. It’s one of the most well-known populations of free-roaming horses in the United States—a draw for tourists, photographers, and horse lovers.

On July 13, the helicopters showed up. Operated by private contractors commissioned by the Bureau of Land Management (BLM), the low-flying helicopters drove hundreds of startled horses off the public lands and into holding pens. On a hillside nearby, activists opposed to the roundup protested and documented the event.

From July 13 to July 18, BLM rounded up 435 stallions, mares, and foals from the Onaqui Mountain Herd Management Area, one of 19 it manages in Utah. One young mare suffered a broken ankle in the frenzy and had to be euthanized. The agency gave fertility control injections to just over a hundred mares and stallions before releasing them back to the wild. The rest—about 350 horses—were sent to holding facilities, to enter permanent captivity...